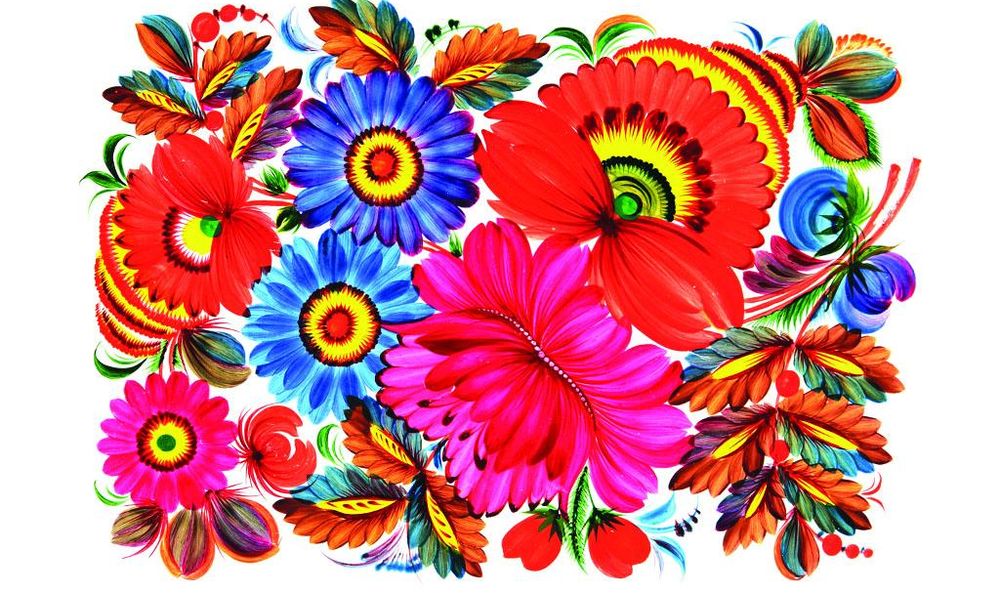 Petrykivka painting originated in the central part of Ukraine, namely, in the urban village of Petrykivka, Dnipropetrovsk oblast. Initially used as an art of ornamental decoration of houses, only later it was transferred to other areas and household objects. The uniqueness of the painting is its vegetative, mostly floral, ornament, which is based on the study of natural forms of local flora and the creation on this basis of non-existent in nature flowers ("luchok", "kucheriavka"), leaves ("fern"), buds. Motifs of garden and meadow flowers, vibernum berries, strawberries and grapes are widely used. The main compositional plots are "basin", "bouquet", "twig", "frieze", which are used as components of architectural decoration, however, lines of branches and stems do not intersect each other. The figures of birds, animals, and people have an outline image. Figures of animals are depicted in profile, while flowers are shown en face. A characteristic feature of the painting is light background (like a white wall of a house), although other backgrounds are used: green (like a beam of a house or a chest), blue, black (it became popular during the Soviet era).

All Petrykivka artists paint without a pre-drawn outline. The virtuosity of performance is achieved by painting with the help of a thin brush made of cat hair. In addition to a brush, stems, tree shoots are also used, and some berries and flowers are depicted using only fingers. Traditionally, Petrykivka masters use egg tempera, gouache, oil paints over primer, and varnish-covered painting.

The main area of ​​the element's existence is the urban village of Petrykivka, however, the element is common in all villages of Petrykivskyi district, and can also be found in neighbouring villages and cities, for example, in Tsarychanka, Mykolaivka, Zhovti Vody and even in the city of Dnipro. This is due to a relocation of Petrykivka inhabitants to other settlements.

Since 1775 Petrykivka was a public settlement (“sloboda”) and therefore there was no serfdom. Various handicrafts, including artistic painting, were developed there. Petrikivka atists’ products were highly valued at local fairs even then.

At the beginning of the XXth century, Petrykivka artists mastered some new materials - water and oil paints. Mural paintings, which were painted by pigments extracted from plants, in the early 30's, appeared on paper, natural dyes were replaced by factory ones. New opportunities for artistic creation appeared, which contributed to the development of traditional art.

Age-old traditions of Petrykivka painting are transmitted from a master to a student, from generation to generation in a family. There are even entire creative “dynasties” of masters of this folk art: families of Pat, Panko, Pikush, Deka, Turchyn and others. In Petrikivka, almost in every family there is a bearer of this type of ornamental-applied art. Talented masters of the modern period, who have received secrets of painting from previous generations, preserve its uniqueness, add to it new thematic and technical findings, which contributes to the development of Petrykivka painting.

In 1991, with the assistance of National Union of Artists of Ukraine and on the initiative of A. Pikush, the Centre of Folk Art "Petrykivka" was created, which united more than forty masters of traditional painting, who preserve and develop predecessors’ achievements.

The Centre carries out various presentation activities: exhibitions of Petrykivka painting at Ukrainian National Museum-Archive in Chicago and Ukrainian Cultural Centre in Philadelphia, the USA, a retrospective exhibition "Unfading Light of Petrykivka Painting" and exhibitions at National Museum of Ukrainian Folk Decorative Arts in Kyiv, at a museum of Lesya Ukrainka in Yalta, at Poltava local history museum, in Khmelnytskyi and Bila Tserkva cities.

Today, the works of leading masters are displayed at exhibitions in many countries around the world: Poland, France, Holland, Germany, the USA, Canada, and Japan. The Centre has a permanent exhibition of Petrykivka painting. For many years, the Centre has been assisting Petrykivka Art School named after T. Ya. Paty.

On December 5, 2013 Petrykivka painting became the first Ukrainian element inscribed into the UNESCO Representative List of the Intangible Cultural Heritage, which strengthened the interest to this kind of decorative and applied art. In particular, there is much interest in Petrykivka painting among researchers, designers, art lovers. The response to this event is significant in popular culture as well - interpretation of Petrykivka motifs is observed in decoration of household objects, architectural and spatial environment and so on. Thus, this ancient tradition took a new form of existence, adapting to needs of modern world.

Petrykivka – an urban village of Petrykivka district in Dnipropetrovsk Oblast