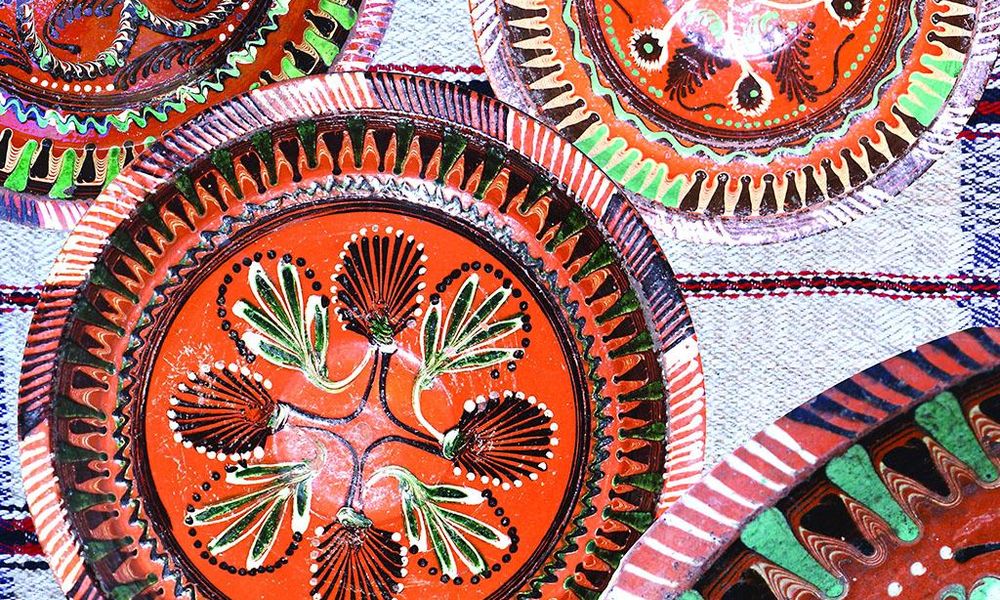 Ornamental compositions of Bubnivka painting are composed of mainly plant-like and conditionally decorative details, which made by a horn (in the past) or rubber syringe (at the present time) in different variations. The ornaments are applied black, dark brown, green, white slip to the background of red ochre colour, creating a contrast and a harmonious combination of natural colours at the same time. The use of "fliandrivka" technique increases the artistic variations of Bubnivka painting. As a result of master’s imagination and the combination of technical tools, Bubnivka ornamental painting has unique and diverse decorative beauty, refinement and endless richness of graphic forms. A peculiar traditional range of ornamental motifs of Bubnivka painting are “vylogy”, “kosychky”, “vynograd”, “kvitkova fliandrivka”, “koloskova fliandrivka”, “barvinok”, “sosonka”, “puskavky”, “derevtse”, “kvitka” and others.

The works of Bubnivka craftsmen - bowls, ladles, jugs for alcohol (“kumanets”), pitchers, vases, small plastic things, services, thanks to the strong traditions of ceramic painting, have a stylistic affinity and a decorative expressiveness.

Bubnivka ceramics history begins with Novoselivka village (original name - Honcharivka), located on the banks of the river Sob (Sib). In the XVIth century several families of potters who started this craft have settled there. The development of pottery, the search for new pottery clay led to the foundation on the opposite bank of the river the village of Bubnivka. In the XVIIth century it is mentioned as a potter's centre.

The founder of Bubnivka painted pottery was a hereditary master Andrii Honchar (1823 - 1926), who mastered the secrets of ceramic glaze to perfection, learnt and approved the technique of coloured underglaze paintings. Andrii Honchar studied Ahafon Herasymenko - a father of famous potters Yakiv (1891 - 1970) and Yakym (1888 - 1970). For two years Herasymenko brothers worked in an experimental workshop at Lavra School in Kyiv. Their works were exhibited in Paris, New York, London, Moscow, and Leningrad. They were awarded with gold medals and Honoured Masters of Folk Art title. In 1988, in Novoselivka, in the house where Yakym Herasymenko lived, the museum-estate of Herasymenko brothers was opened.

In 1995-1997 the National Union Folk Art Masters of Ukraine, together with the Department of Culture and Tourism of Vinnytsia Regional State Administration and Vinnytsia Regional Centre of Folk Art, held several Ukrainian symposia-workshops for pottery masters in Bubnivka, in order to develop Bubnivka traditional pottery. As a result of these events, masters-bearers of the tradition of ornamental painting began to work actively in Bubnivka. Among them is the Honoured Master of Folk Art of Ukraine Tetiana Shpak, who created a workshop at home. She productively works and participates in all-Ukrainian, oblast and regional exhibitions of folk art, acting as an intensive representative of Bubnivka ceramics.

Supported by the Department of Culture and Arts of Haisyn Regional State Administration, the village community of Bubnivka and Novoselivka, Vinnytsia Regional Centre of Folk Art holds regional educational plein air - workshops of pottery. Such practical events give Vinnytsia ceramists the opportunity to master the tradition of ornamental painting of Bubnivka ceramics directly from the artists of the village.

In the current circumstances, the experience of homeschooling from the master to the pupil is complemented by the master classes during numerous seminar -workshops, folk art exhibitions, plein airs of potters in Bubnivka, Novoselivka, Tulchyn, Vinnytsia, as well as a group and studio form of education for children and youth held in a secondary school in the village of Bubnivka, at the College of Culture in Tulchyn, in the ceramics club of the Vinnytsia City Palace of Children and Youth.