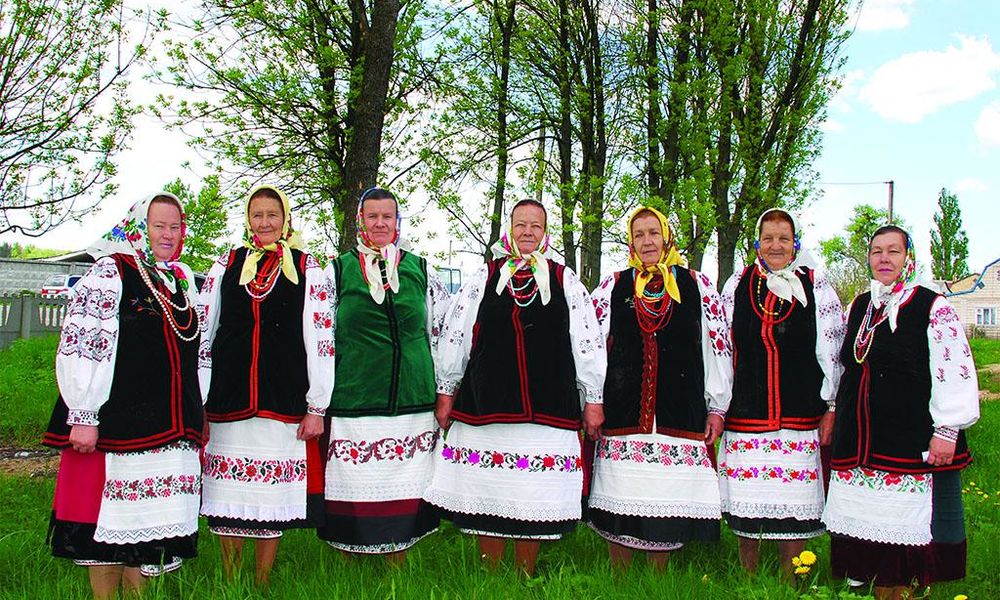 Singing tradition of the village Luka is best kept in the performance of the participants of the folk ensemble "Red Guelder Rose" ("Chervona kalyna"), which functions on the basis of the club in Luka. The total number of songs of the band's active repertoire is 316.

The element “Singing Tradition of the Village Luka of Kyiv-Sviatoshyn District in Kyiv Oblast” covers almost the whole spectrum of Ukrainian folk songs: carols, shchedrivkas, vesniankas, Kupala, harvesting and wedding songs, lullabies, love songs, orphan and wage labour songs, chumak and Cossack songs, everyday and historical songs, ballads, romances, humorous and dance songs, psalms. They constitute the song heritage of the village, which has been formed for many centuries.

Calendar – ceremonial songs of the village Luka mostly have heterophonic one- or two-voiced texture. Drawling songs predominantly have a three-voiced composition: upper and lower voice layers (“bottom” and “top”). Upper voice (“vyvid” – the name of upper voice) in drawling songs is sung by one person, and lower layer is occasionally split into two or more voices.

Folk manner of songs performance by the band “Chervona kalyna” is quite illustrative. On the one hand, this manner exactly corresponds to the principle of sound formation and to stylistics of authentic style; on the other hand, it doesn’t contain any screaming and is very melodious. It can be said, that the band collectively reaches the top in the national manner of singing, preserving practice of previous generations.

The element Singing Tradition of the Village Luka of Kyiv-Sviatoshyn District in Kyiv Oblast covers the territory of Luka village and the neighbouring village, Gorenychi. A certain part of songs, that are in the repertoire of the band "Chervona kalyna", is also found in surrounding villages, in particular, Gorenychi, Petrushky, Zabiri, Lychantsi, Bobrytsy, but they exist mostly in the passive memory of elder people.

The band "Chervona kalyna" was founded in 1986 by its current leader Nadiia Yevhenivna Labunska. She managed to gather best singers of the village. One of the leaders in this group was Nadiia’s mother, Oleksandra Hryhorivna Herasymenko (born in 1925), who mostly sang the upper voice in all songs. Nadiia Labunska was the youngest member of the band in those days. Over time young performers joined the band, including Anna Volodymyrivna Voloshyna (born in 1950), who is now a lead singer in the band. The soloist, who sings the upper voice (“vyvodchytsia”) in the band today, is Nadezhda Labunskaya. She adopted this manner of performing from her mother. At the moment, only one old member of the band, Dmytrenko Oleksandra Semenivna, (born in 1936), who equally well sings in upper and lower voices, constantly participates in all events.

Among other residents of Luka village are also bearers of traditional song culture, who practice this element in everyday life, at folk holidays, family meetings, etc., sporadically uniting into small singing groups.

For making records and ethnographic research of singing tradition of the village Luka, 30 expeditions were conducted, during which 350 different songs performed by the members of the group "Chervona Kalina" were recorded. A thorough study of the element "Singing tradition of the village Luka" was carried out from 2007 to 2009 with the scientific analysis of professor of Department of Folklore Studies at Taras Shevchenko National University of Kyiv Ivan Pavlenko, which resulted in the following works: "Singing tradition of the village Luka": a handbook for musicians - folklorists and philologists students of specialized higher educational institutions / the author-compiler I.Ya. Pavlenko – K.: Lybid, 2009. – 248p; "The textbook on Ukrainian folk-singing performance": a handbook / I. Ya. Pavlenko - K.: Publishing-printing centre "Kyiv University", 2013. - 320 p., 7 ill.

The element "Singing tradition of the village Luka of Kyiv-Sviatoshyn District in Kyiv Oblast” is transmitted through the inheritance of songs, which were sung by the band" Chervona kalyna ", other bands, singing amateur associations of the village Luka and neighbouring villages. The songs of the band are studied in Music lessons at school, in kindergarten of the villages Horenychi and Muzychi.

Singing tradition of the village Luka is studied in the disciplines: "Methodology of work with folk ensemble", "Management of folk singing bands", "Fundamentals of the theory of musical folklore", "Complex analysis of a folk song", "Ukrainian folk polyphony, arrangement of folk songs", "Transcription of folk music" at the Department of Folklore Studies at the Institute of Philology at Taras Shevchenko National University of Kyiv and in  Nizhyn Communal Higher Educational Institution " Nizhyn College of Culture and Arts named after Mariia Zankovetska" of Chernihiv regional council .