Ornek - a Crimean Tatar ornament and its denotations

Ornek - a Crimean Tatar ornament and its denotations 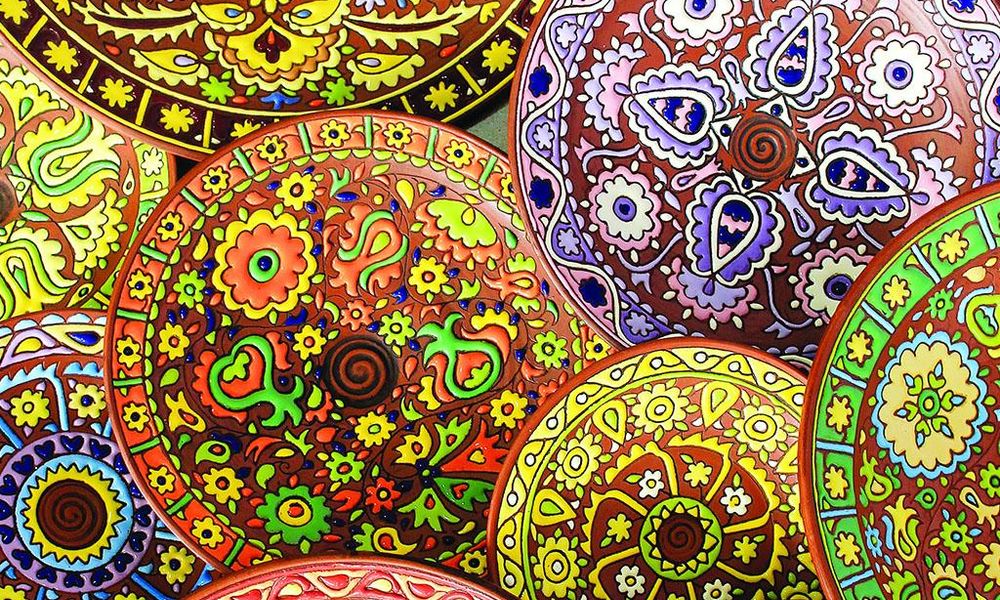 Ornek is a traditional ornament of Crimean Tatars. The combination of different elements in Ornek creates a composition through which you can tell a whole story. Knowledge about the meaning of each element, as well as ability to read them, is a living phenomenon of the Crimean Tatar culture.

Ornek consists of various elements of floral and geometric character. The artists, creating different ornaments, avoid illustrative plausibility of depicted plants and objects, turning them into geometric signs. Colour scheme of objects is different from their colour in reality. This method makes it possible to achieve a peculiar effect of dematerialization. The purpose of such technique is to emphasize symbolic rather than realistic nature of images.

For a long time Crimean Tatars have maintained the custom to decorate their houses with ornamented objects of decorative and applied purposes. The Crimean Tatar ornament and its elements are used in embroidery, as well as in ceramic, metal and wood products, in weaving, jewellery, etc.

The Ornament is a way of transferring knowledge from generation to generation in cultural and historical aspects of people's livelihoods. Items with the traditional Crimean Tatar ornament Ornek are always a pride of a family; they are carefully stored and transmitted by inheritance.

The Crimean Tatar ornament is an amazing phenomenon of folk culture. Its themes, symbolism, technology are rooted in the ancient history of Crimea. Ornek has accumulated artistic techniques and traditions of many nations who participated in the ethno genesis of Crimean Tatars. With the advent of the Crimean Khanate in the middle of the XVth century original ornamental art of Crimean Tatars flourished and continues its development in Crimea and in many cities of Ukraine: Kyiv, Kherson, Lviv, Vinnytsia, Kharkiv, Lutsk, Melitopol.

Up to the middle of the twentieth century, diversity and high artistic level of numerous ornaments were achieved thanks to the work of craftswomen “nahkash”, whose craft was transmitted from generation to generation. Nahkash have knowledge and experience in creating ornaments for embroidery and weaving. Today a wide range of masters of applied arts have knowledge about Ornek and apply it in practice.

The oldest master who continues to create unique works, as well as to teach students is 90 years old. The youngest bearers of this element of the intangible cultural heritage are students of after-school clubs, aged between 10 and 12 years, who study peculiarities of existence and use of the Crimean Tatar ornament. The age of craftwork items’ users ranges from newborns to elderly people, because at all stages of life, objects with the image of an ornament are used, namely: in a birthday ceremony; in customs of matchmakings and weddings; in religious ritual of circumcision of boys; housewarming; establishments of houses; memorial ceremonies. Household items, clothes, accessories, furniture, ritual things with the image of the Crimean Tatar ornament, as an element of self-identification, are an essential part of life of each Crimean Tatar family.

During the last 25 years, after the Crimean Tatar repatriation to their native land, projects supported by international foundations have been implemented. Thanks to these projects, it was possible to create a number of workshops (jewellery, embroidery and ceramics workshops), in which bearers under 90 years of age held classes on folk crafts, using Crimean Tatar ornament Ornek. The projects helped to systematize the process of transferring knowledge in such forms as master classes, courses, theme evenings, trainings. These events are organized regularly on the basis of specialized public organizations, ethnic souvenir shops, ethno-cafes. A significant part of listeners and participants of formal and informal ways of transferring knowledge are young people, pupils, and students.

Transferring cultural practices from generation to generation is a major factor in formation of a national identity. In return, cultural self-expression and self-identification are the necessary conditions for the peaceful and full-fledged existence of society.

The element and its components have been studied at the Faculty “Decorative and Applied Arts and Handicrafts” of Crimean Engineering and Pedagogical University (AR of Crimea, Simferopol). Numerous monographs, scientific articles, handbooks are focused on the study of the Crimean Tatar ornament. Crimean masters and artists in the creative association "Chatyr Dah" Mamuta Churlu are engaged in preservation, development and popularization of Crimean ornament Ornek.

Symbolically, it is precisely in 2018, which has been declared the year of Safeguarding of Cultural Heritage, that the Crimean Tatar traditional ornament Ornek, on the initiative of the public organization "Aliem", is inscribed on the National List of Intangible Cultural Heritage of Ukraine.