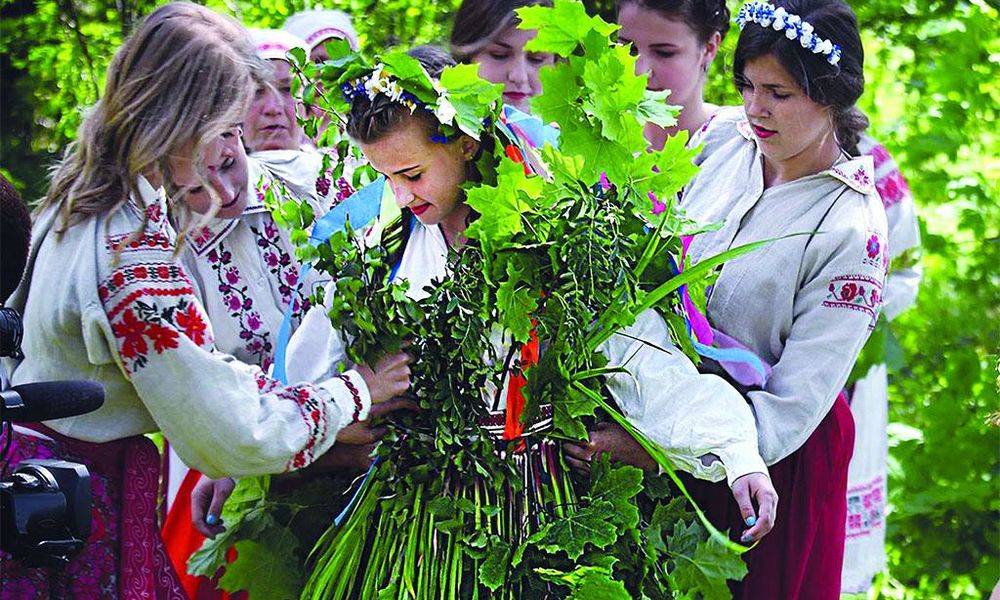 The history of the ritual “Vodinnia Kusta" dates back to pre-Christian times. The action held in the conjunction with summer solstice. The main festive object - “Kust” (a young girl dressed in branches) - represented the souls of the dead, as if they appeared in our world during the Trinity period. Ancestors played the role of mediators between this world and the world beyond, and coaxing them in the form of giving gifts to “Kust” guaranteed family and economic well-being for the whole year.

The ritual is carried out only by women and girls on the 50th day after Easter on the feast of the Trinity. It lasts three days. On the first day they go to a cemetery, decorate graves with calamus and maple branches. Elderly women in the form of crying-recitative try to "start a conversation" with their relatives, tell them about events of the previous year - "wail". Then they gather in a forest and dress (“klechaiut”) the most beautiful girl. They stick trees branches and calamus behind the edge of the girl’s clothes and on her head put a lush wreath, made from maple leaves and flowers. The group of women with “Kust” visit all dwellings, singing flattering “kustovi” songs, and in the end express a wish: “Vyidy, hospodare, z novoho pokoya. Vynes Kustu hoch da puvzolotoho”, “Vodymo Kusta, shchob druhoho roku dozhdati i pospivati”, “Shchob ishov doshch i vse bulo zelene!”

The ritual finishes in the field, where the “Kust” - girl's greenery, is disassembled, torn apart, and, as a symbol of fertility, is thrown for "harvest". Separate twigs from "Kust" are brought home and scattered around a kitchen garden.

Despite diverse historical, socio-political and religious difficulties, “Kust” has survived to the present day, but only within the ethnographic territory of Pinshchyna (most of the villages of Zarichnenskyi district, some villages of Dubrovitskyi district of Rivne oblast, several villages of the Liubeshiv district of Volyn oblast and Pinsk district of Brest oblast, Belarus).

In Ukraine the area of ​​this tradition extends to the territory of villages of Zarichnenskyi, partly Dubrovitskyi and Liubeshiv districts, however, today the rite is fully reproduced only in the village of Svarytsevychi of Dubrovytskyi district in Rivne Oblast.

Having learned about unique singing in the village of Svarytsevychi, a collector of folklore, Svetlana Kitova, was one of the first who started to study ancient traditions at the scientific level. With the help of specialists of M. T. Rylsky Institute of Art, Folklore Studies and Ethnology Institute of the Academy of Sciences of the UkrSSR ascertained that this singing is an exemplar of the ancient Slavic rite “Vodinnia Kusta". S. Kitova published a scientific article about this unique village in the journal "Folk Art and Ethnography" in 1972 (No. 3, pp. 67-73). Later, the researcher repeatedly reported to public on ritual clothing and “Kust” songs at scientific conferences in Moscow, Kyiv, Lviv and Rivne.

All the villagers participate in the celebrations. It is about 2000 people. Among them are young girls (from 5-6 to 16-17 years old), as well as older women (from 20-30 to 60-70 years old) who transfer their knowledge of the tradition to younger generation. Of particular note are community members of the village Svarytsevychi – the Chudynovych’s folk amateur family ensemble, who preserve, popularize and transmit to the present generation the ritual “Vodinnia Kusta".

Information about “Kust” in Rivne oblast was recorded by members of expeditions of Lviv branch of the Rylsky Institute of Art Studies, Folklore and Ethnology (under the leadership of Ph.D. R. Kyrchiv), Head of the Polissya sector of Museum of Folk Architecture and Life of Ukraine L. Orel, Honoured Worker of Ukraine Culture, the artistic director of Vesnyanka Ethnic Cultural Centre of the Rivne Palace of Children and Youth V.Kovalchuk. A lot of attention was paid to the village by a folklorist and a writer Vasyl Skurativskyi. His collected observations were reported in a number of publications. Also, the ritual was studied by researchers Oleksa Voropai, Bohdan Stoliarchuk, Oleksii Dolia, Raisa Tsapun, Raisa Tyshkevych, Oleksii Nahorniuk, Yurii Rybak and others.

The ritual is already included in the repertoire of folk groups from Svarytsevychi of Dubrovytskyi district, Stari Koni of Zarichnenskyi district, Liukhcha of the Sarny district of Rivne oblast, folk groups "Volodar", "Rozhanytsia", Kyiv, "Vesnianka", "Rankova rosa", "Goryna", "Dzherelo", "Volyniany" from Rivne, as well as music groups of Zhytomyr region and Belarus . “Kust” songs with modern arrangements are present in the repertoire of such singers as Katia Chilly, Illaria, Lviv folk rock band Joryj Kłoc, which promotes interest and knowledge of the ritual to youth.

Over the past 8 years, in order to popularize and preserve the ritual, the district festival of folk art "Vodinnia Kusta» is held at Trinity in the village of Svarytsevychi.